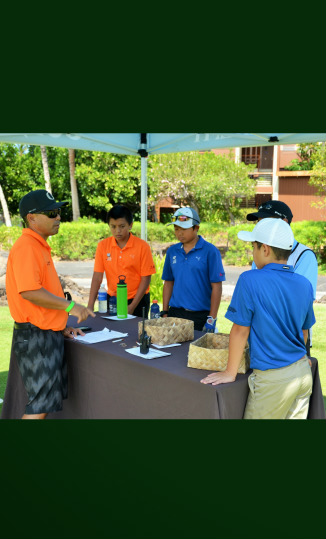 All Junior Golf participants in the BIJGA program must abide by the following general rules:

2. Be considerate of fellow competitor(s) and play the game acccording to the rules set by the USGA Rules of Golf and local rules as announced or posted.

3. Conduct yourselves accordingly. . We are guest of the golf courses so courtesy and proper behavior is expected at all times.

4. No loitering or wandering in the pro-shop and restaurant-bar area unless you are there to make a purchase.

5. Be at the golf course and check-in with the person in charge at least 20 minutes before tee-time. Penalty - 2 strokes

6. BIJGA collared shirts must be worn by players at all scheduled BIJGA golf events. Penalty - 2 strokes

8. Shirts must be tucked in and belts worn if pants or shorts have belt loops. Girls shirts with straight hems designed to be worn out are allowed. Girls are also allowed to wear skirts or skorts. Penalty - 2 strokes

9. Friends, guardians, or parents may not accompany or communicate with player during tournament or club play (unless one is a caddy, scorekeeper, tournament official, etc.). Cheering the Junior on such as "good shot!" in English, is allowed.

10. Unauthorized "PICK-UPS," will automatically suspend the Junior; only the scorekeeper or tournament chairperson may authorize a "PICK-UP" at any time.

11. Electronic enhancements such as GPS devices or range finders (without slope) are allowed in tournaments.

12. A Junior Golfer may be reprimanded, penalized, disqualified, suspended or dropped from the program for any of the following infractions. See our BIJGA Handbook for more detailed information on the following:

a. Littering on the golf course and premises

b. Failure to replace divots on fairways, tees and greens

g. Fighting or endagering other Junior Golfers in any

j. Use of illegal drugs

k. Inappropriate and/or harmful behavior including,

but not limited to insubordination, harrassment,

Additional rules and information may be provided by tournament chairperson.